Today we decided to spend most of the day just chilling on the beautiful Tanjung Rhu beach. We just liked that place so much and decided to go back. It’s everything you’d want from a tropical beach – white sand, blue water, breathtaking scenery and relaxing atmosphere with not many people around.

But our journey started with quite a adventure. About 3km from our hostel while we were driving with our scooter I gazed at the mirror and suddenly saw a huge cloud of white smoke coming from the back of our bike accompanied by an oil spill and a sudden loss of power. Just great!, I thought! Luckily it didn’t happen on the other side of the island. So we pulled over and called an emergency number given to us from the hostel. After about half an hour of waiting they came to get us… with another scooter that was basically just as broken as ours :). Either way we somehow limped back to the hostel with  both 2 scooters creating a massive hole in the ozone layer (luckily it wasn’t that bad but still 🙂 ). There we were given a substitute machine with about half a million miles on it. But hey, at least the engine was working properly :).

These kind of things can happen, especially with rental machines and since it wasn’t our fault all repair works will be covered by the hostel. Big thanks to them for such a quick reaction to come to get us and providing us with a new scooter! But still, their machine park is in a need of an update :).

In the end we got to the beach and spent most of the day there as planned. I don’t know is it due to the fact that we’re nearer to the equator but middays here are really scorching! So definitely bring sun-screen and every once in a while stay in the shadows while visiting Langkawi.

And one more thing. Maybe at first you may not like Langkawi as much as some other places but this island has a tendency to grow on you :). Just look at it… 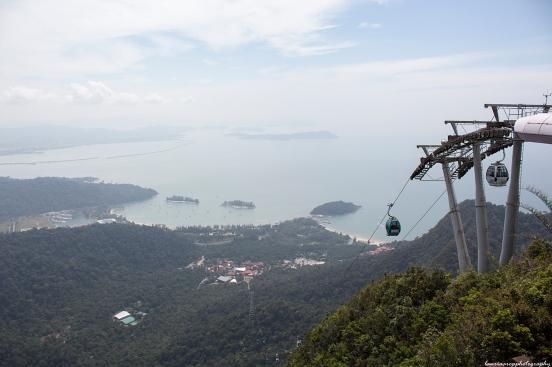