Phuket is Thailand’s biggest island. It covers approximately 543 square kilometers, houses about 600,000 inhabitants plus a a horde of tourists and has definitely a lot to offer from picturesque beaches, beautiful mountains and green lush jungle. You can read more about it from here. And so yesterday we decided to go and make a full circle round the island. It took around 6 hours (with all the stops included), 120km’s (which doesn’t seem like much of a distance but believe me on our small scooter it’s quite a ride!) and 2 fuel stops. We started from where we live, at the southern part in Rawai, drove all the way to the airport through the west coast and then back again from the east coast. We missed the most northern tip of the island but maybe we will go there some other time in the future 🙂 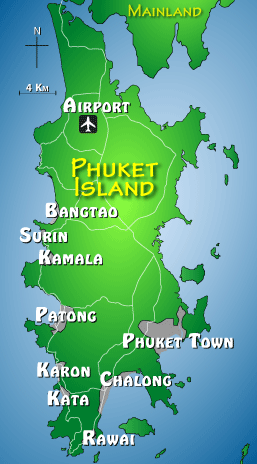 Either way – the southern part and most of the west coast is lined with beautiful beaches with mountains and cliffs dividing them. Of course in most of the places they are supported with smaller and bigger towns, hotels, resorts and villages. I have already in the previous posts written about Yanui, Nai Harn and Ao Sane beaches. Also more touristy Kata and Karon have been mentioned along with crazy Patong area. But if to drive north from there there are still tens of bigger and smaller beaches to be discovered. And the more further you go from Patong the more relaxing and chill the scenery goes. The nearest ones to that direction are Kamala and Surin beaches, latter of which we really liked. There’s a beautiful area of palm trees near the sand where you can just lay back in the tree shadows and enjoy the view without being disturbed by much of a crowd. There are also few dining places and an opportunity to rent lazy tubes or kayaks.

But a bit further north from there you can find the Bang Thao beach, also called a Dream Beach. And it really lives up to the name. I have never seen so long beach in my life (more than eight kilometers long; only Mai Khao beach which is located in the northern part of Phuket near Sarasin bridge is even longer). There were very few people strolling along the beach and beautiful sand as far as the eye can see. On the way there we drove through a high-end residential area filled with gorgeous huge villas and other beautiful houses. It seems that people living there go to this beach when they’re in a mood to dive somewhere else than they’re home swimming pool :). In addition there was a lot of luxurious hotels and resorts on the way.  If you like to stay in a more secluded relaxing area then this is a place to be and also one of the most-visits when you’re on Phuket:)!

Next is the Banana beach. Which makes this one special is that in order to get there you have to park your scooter or car at the side of the road and then walk/climb down from a rather steep hill. And when you get down there it’s just the beach. No touristy establishments, just you, the sand, the sea (and of course the other people who have decided to make the climb). So it’s once again rather secluded area where do have a swim and just relax.

And the last ones on our journey were Naithon and Naiyang which resemble Kamala and Surin beaches but even more quiet. So there’s plenty to choose from :)!

All in all the west coast is the area to visit. Most beautiful places and beaches as described are all on that side of the island. And it’s really fun drive also – constantly up&down, left&right. Be sure to have some resting stops for both yourself and the scooter (if you decide to go with one).

Driving back from the other side of the island there are a lot of tree plantations, fields, small towns and highways. Basically there are mostly local people living in that part of the island and not many tourists seen around. Also there isn’t actually an opportunity to drive on the coast so you don’t get a glimpse of the sea which is unfortunate. We tried to visit Bang Pae waterfall but as it turns out it’s a part of a national park and there’s a 200baht entrance fee per person. Since by that point we already had quite a long drive behind us so we decided not to visit and really if you want to see some magnificent waterfalls – go to Chiang Mai :)!

I hope you found some value from this post! Phuket awaits you :)!